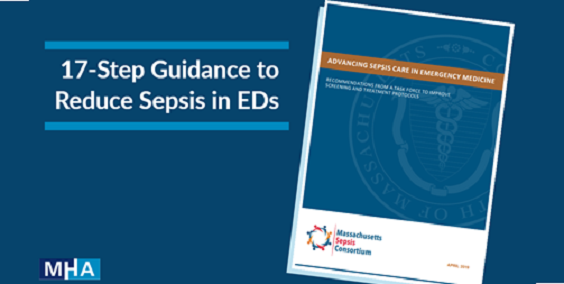 The Massachusetts Sepsis Consortium, led by the Betsy Lehman Center for Patient Safety, has released a report — Advancing Sepsis Care in Emergency Medicine — containing 17 recommendations that hospitals and emergency departments can undertake to reduce incidences of sepsis.

Sepsis – the body’s extreme response to an infection that can lead to rapid tissue damage, organ failure and death if not treated quickly – is among the top causes of 30-day hospital readmissions in Massachusetts and is the third leading cause of the state’s hospital inpatient deaths.

Combatting sepsis is difficult. The symptoms of it are vague and easily confused with other conditions. There’s no definitive blood test to determine if a patient has sepsis. And there is no definite guidance from specialty societies on how to treat or report it. For example, most hospitals follow CMS’s “SEP-1” guidelines, which require extensive reporting. But many large insurance companies are now requiring international Sepsis-3 guidelines that mandate an entirely different form of reporting.

The Consortium’s report notes, “Despite these challenges, there are best practices on which most experts agree and for which there is well-established peer reviewed evidence.” The Sepsis Consortium, of which MHA is a founding member, decided that since most patients with sepsis enter the health system through the hospital ED, it would launch a special task force to develop ED protocols. That task force was chaired by Thomas Amoroso, M.D., medical director for utilization management at Commonwealth Care Alliance, and John J. Walsh, M.D., an emergency medicine physician at South Shore Hospital and the task force’s Mass. Medical Society representative. Every hospital in the state sat for interviews to help inform the task force’s work.

The Coalition says the focus on sepsis in the ED is “only one piece of the larger puzzle” and that in coming reports it would address sepsis in other care settings.